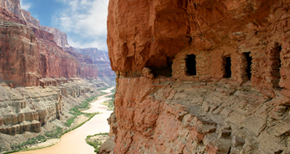 The National Historic Preservation Act (NHPA) of 1966 is a federal law that protects archaeological resources in the United States. The What is the NPHA? [PDF 1.3 MB] fact-sheet from SAA helps explain the NHPA. It includes common misconceptions about the law and explains the Section 106 review process, which is particularly important to historic preservation.

Archaeological sites contain important and irreplaceable information about the past. Unfortunately, climatic changes, development, vandalism, and looting destroy sites at an alarming rate. Site protection is not only the responsibility of law enforcement officials or archaeologists. The past belongs to everyone, and it is everyone’s responsibility to help protect and preserve it.

Laws in the United States on federal and state lands protect archaeological sites. People who violate these laws can be prosecuted. Laws pertaining to private lands distinguish between surface collecting (picking up objects laying on top of the ground) and any ground-disturbing activities, like digging for artifacts. Laws pertaining to state and federal lands do not distinguish between surface collecting and digging for artifacts. In other words, removing artifacts from state and federal lands is illegal.

In the United States, it is legal to collect artifacts from private property if you have written permission from the landowner. Other requirements are dependent on the state. If you are interested in collecting or metal detecting on private property, contact your State Historic Preservation Office for more information.

It is illegal to disturb human skeletal remains or burials. It is also unlawful to receive, keep, own, or dispose of any human body part (including bones), knowing it to have been removed from a grave unlawfully.

To surface collect, metal detect, or to legally dig on any state property, you should check the permitting requirements in your state. State property includes state parks, historic sites, wildlife management areas, and state forests. It also includes state highway rights-of way, navigable river and stream bottoms, and some coastlines. Your State Historic Preservation Office or Department of Natural Resources can direct you to more information.

In 1906, President Theodore Roosevelt signed the Antiquities Act into law. This established the first broad legal protection of cultural and natural resources in the United States. Since then, there have been other legal successes for preservation on federal lands. The National Park Service provides an overview of federal historic preservation laws affecting federal archeology and preservation.

It is illegal to surface collect, metal detect, or dig on any federal lands without a federal permit. Federal lands include lakes and lands managed by the Army Corps of Engineers or the Bureau of Land Management. It also includes U.S. Forests, National Parks, National Wildlife Refuges, and military bases.

In 1996, the SAA Executive Board adopted the Principles of Archaeological Ethics, as proposed by the SAA Ethics in Archaeology Committee. These principles guide archaeologists "in negotiating the complex responsibilities they have to archaeological resources, and to all who have an interest in these resources or are otherwise affected by archaeological practice" (Lynott and Wylie 1995:8).

The Register of Professional Archaeologists (RPA) maintains a list of archaeologists who have agreed to abide by its code and standards of professionalism. The Archaeological Ethics Database, maintained by RPA and the Chartered Institute for Archaeologists, includes a range of resources related to ethics in archaeology.

The World Archaeological Congress (WAC) is an international organization that connects people from all around the world. WAC has adopted several Codes of Ethics. These codes concern the protection of indigenous cultural heritage around the world. They work toward establishing meaningful relationships with indigenous peoples and local communities and maintaining respect for human remains and sacred objects.

Violation of these laws carries serious consequences. These include the possibility of fines, jail time, and confiscation of the metal detector and other equipment used in the violation (such as vehicles). Other laws may apply including theft, destruction of property, vandalism, and driving in prohibited areas.

In response to a rise in metal detecting TV shows, SAA formed the Task Force on Reality TV and Metal Detecting. The 2014 report of the task force stressed the need for ongoing productive collaboration among archaeologists, metal detectorists, and the media. The March 2015 issue of the SAA Archaeological Record [PDF 1.3 MB] then focused on the issues and opportunities presented by the public interest in these shows. Building on these discussions and recognizing the value in working together, SAA released a statement on collaboration with responsible collectors in 2018.

Some archaeology programs, such as James Madison's Montpelier Archaeology Digs, are designed for metal detector specialists and hobbyists to work with archaeologists. Combining expertise has helped archaeologists to better locate and protect sites.