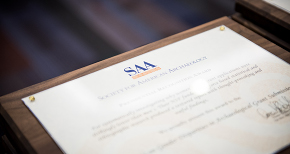 Photo Credits
Photo by the Society for American Archaeology

Arthur Caswell Parker (1881–1955) was the SAA’s first president, who served from 1935 to 1936. He was of Seneca ancestry through his father’s family, and he spent his first 11 years on the Cattaraugus Reservation in western New York. His professional contributions included research in archaeology, cultural anthropology, and history as well as public education and the development of museum anthropology. Parker was also involved in contemporary social and political issues that affected Native Americans.

Bertha Parker Cody (1907–1978) was the first Native American woman archaeologist and ethnologist in the United States. She was the daughter of Arthur C. Parker (Seneca), the first SAA President serving from 1935–1936, and the actor Beulah Tahamont (Abenaki of the Eastern Algonquian). She often accompanied her father to excavations as a child, which introduced her to the field of archaeology. As an adult, her uncle by marriage Mark Raymond Harrington, who was an archaeologist, offered her work at a site in Nevada, where she learned archaeological field methods. In 1930, she discovered a Pleistocene sloth skull in association with human artifacts at the Gypsum Cave site, which challenged prevailing theories of ancient Native American occupation in the Americas (Bruchac 2018:96–99). In 1933, the Southwest Museum hired Bertha first as a secretary, then as an assistant archaeologist and ethnologist, where she catalogued artifacts and wrote field reports for the Gypsum Cave site (Bruchac 2018:101). She also began ethnological expeditions and research of California Indian tribes, including the Maidu, Yurok, Pomo, and Paiute (Bruchac 2018:104). Throughout the 1930s–1960s, Bertha published her archaeological and ethnological research of these tribes in the Southwest Museum’s journal Masterkey. With this award Bertha Parker Cody’s significant contributions in the field of archaeology and ethnological research of California Indian tribes in the early twentieth century will be appropriately recognized and commemorated.